HISTORY OF THE TRAIN CARRIAGE: RENOVATION

From the outset we knew we could not pull off an authentic train carriage restoration. The carriage was too dilapidated.

Condition of the Train Carriage

It needed a theme. Something not too serious.  STEAMPUNK was a fringe aesthetic back then, that had caught our attention, for no apparent reason than it’s absurdity. It’s the future from an 1880’s point of view. It’s a future where electricity was never developed and everything was powered by tinier, cleverer steam power generators. It is bizarre to think of futurism from over one hundred years ago, from a time when railways spanned continents, steam trains represented power, prestige and the finest technology of humanity. Welcome Back To The Future Of Steam!

Every builder we discussed the job with before George, ran away screaming with terror.  George, our “nothing is too difficult” kind of guy, was the man in charge of the renovation, with Mike his assistant. We needed to move many of the walls to make a double compartment for the master bedroom. This may have been a mistake in retrospect, it took days. We probably should have guessed a carriage would be very tightly put together…..

Originally we were going to sand back and varnish floors, but there were so many tight corners, it wasn’t viable, and once we stripped back the grime, the floorboards weren’t much of a feature. So we painted the floor gloss black with a polyurethane skin. The inside paneling up to waist level we painted silver, and we hid all the electrical and plumbing in gold, to create a steampunk gold/black/silver combo; the general theme used through the train with a splash of velvet claret. George started building the kitchen with stainless steel panels, silver oven and stove and a bronze range-hood. 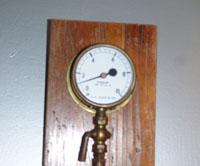 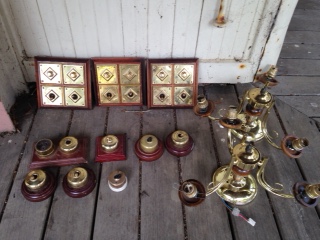 Like many of the fixtures, we sourced them at salvage yards. Where possible we wanted the old fashioned feeling of solid, well-made parts (like the bathroom sink and antique light switches), rather than light-weight-slick. The bronze/copper toilet was troublesome to start with, but we eventually got it working well. When you flush, you can feel the, levers and arms, pins and joints in the cistern doing their bit. George deliberately exposed the steampunk shower pipes, partly for show, mostly for practicality.

It would have been almost impossible to do with a conventional builder, but George is an artist, so every time we got stuck, we just worked out another, often unconventional, way. For us, it was such a fun project, but it certainly wouldn’t be for everybody. We had to keep a light heart to not get bogged down with problems. We hope the fun we had shows throughout. 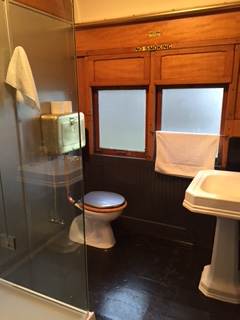 One day, we pulled up a panel in the floor. It covered a linkage mechanism, the thing that joins the carriages together. It is about the size of a small car engine. We oiled it, and covered it with safety glass. It is now a feature, you can walk over it in the master bedroom. There are lots of little features like that, some original, others we’ve added, you just need to explore and find little delights.

Spraying the exterior black, was met with much (train buff) resistance. Rattler Red, was the preferred consensus, but anything would have been better than pink and white. Toby, the local handyman and caretaker’s husband volunteered to do the job. After a huge preparation over several days the temperature was just high enough on a winter morning to spray, with hired equipment. It took about an hour to spray paint the whole train carriage. While it was drying Amida (caretaker), Toby and Mike painted some silver, then another coat of black, and the pink eyesore was gone, forever.

After Steam's launch in Winter 2015, Amida, Toby and Mike kept working on the Train any time there were no guests.  Having done every job under the sun Toby's skill set was just what we needed.

Fleur and Mike still see it as a work in progress. Fleur bought a gorgeous chandelier for the master bedroom, yet to be installed. Mike wants to install a VR video game where you are driving the train, and there are hundreds of things we want to do. For us, it is like a piece of art, that we want to keep improving. We think is far from perfect, but we have been astounded at the enthusiastic support we have had from most guests.

It All Comes To Nothing If You Don't Have A Hoot