Many guests at STEAM have asked about the history of the old carriage. We did a little on-line research but couldn’t find much when we didn’t know what we were looking for. A local resident at Forrest offered that he heard it had been a first class carriage on the Overland Express (Melbourne – Adelaide).

Armed with that information, Fleur excitedly contacted the national railway Museum to ask whether it may have been a First Class, Overland Express carriage. When reading this email reply, make sure you use a stiff upper lip……

Based on the images supplied I am quite confident it is commonly called an ‘E’ car, many built for the Victorian Railways and the joint VR and SA Railways.

I can assure you it is not from the original 1887 Melbourne Express and certainly not first class. These E carriages did not get designed and built until c1910‐15.

Without knowing the carriage ID number – must be on it somewhere, eg. underframe and/or ends of the carriage at the bottom…I cannot comment further apart from the general statement, if an E car it may have been used on the Melbourne Express until the early 1970s……

Bte – the name Overland did not originate until 1936……it was originally the Inter‐colonial Express, then the Melbourne Express.

Bemused and somewhat deflated, our research took a hiatus. For a year, we sent this limited information with directions, but guests kept pressing for “a little more”. Then we got a booking request from Steven, who turned out to be a train buff:

Reading through the information sheet, I thought I’d help you complete the history of this carriage.

It was built in 1926 at Newport as First Class carriage 61 AW and used throughout regional Victoria.

I have attached two photos that I managed to find of your carriage from 1977 (Photo by Rob O’Regan) and the early 1980’s (Photo by Mark Bau). 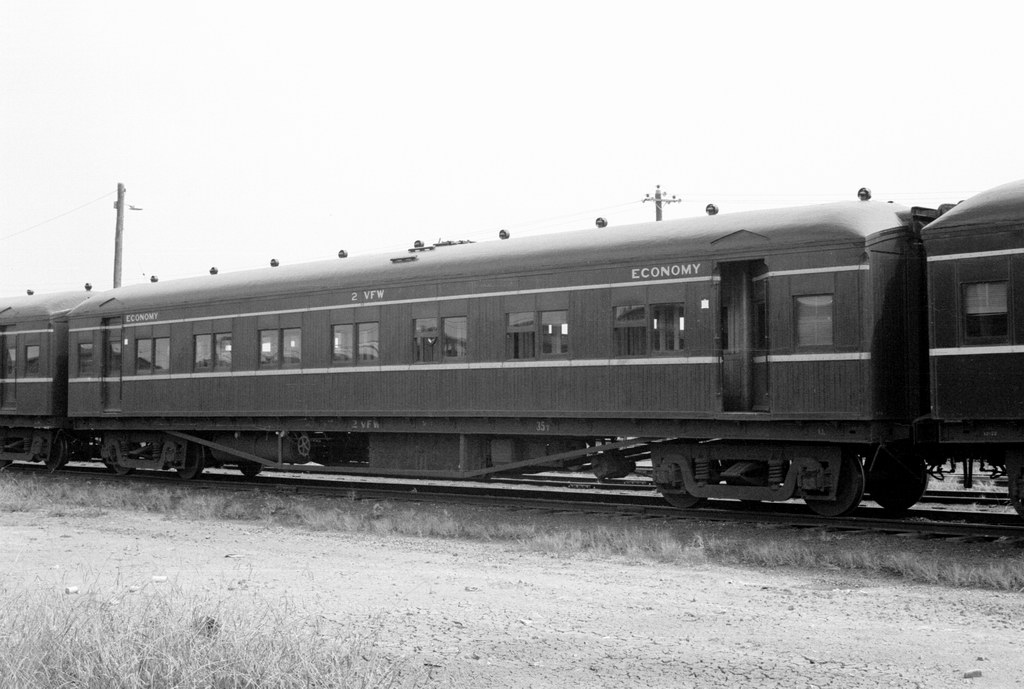 Steamrail Victoria based at Newport own and operates an identical carriage on their regular steam train trips around Victoria.”

Wow, what a great response. We asked him if he could add anything else:

"Regrettably I couldn’t find any reference to your carriage during the early 1980’s before it was withdrawn and sold. During the years 1972 – 1980 that the carriage was painted blue and recoded 2 VFW, one of the main trains that it was used on was the (Relief) Spirit of Progress. This was a non air-conditioned train which ran during holiday and peak times to cater for the overflow of additional passengers from the air-conditioned Spirit of Progress overnight service between Melbourne and Sydney. The carriage also saw use on regular southern NSW trains including the South Mail, and on special charters.... Steven"

It turns out Stephen has stayed in over one hundred train carriages around the world and has a fortuitous knowledge of Australian trains. It’s the chance encounters like this that make this an amazing business to be in.

Loading...
Upps!
You're running a web browser we don't fully support. Please upgrade it for a better experience.
Our site works best with Google Chrome.
How to upgrade the browser